Here’s my first article in the case study series… To make it simple… this series of articles is like a journal for me… I will just note my tests and results here. It will also be a great way for you to learn.

So… Like many people, the May core update hit me hardly… but specifically my EMD sites (My other sites are doing well), so you will be able to see here's what I did, what worked… and what’s not.

Before starting, let me show you the impact that the May core update did on that site:

So like you can see, the drop has been massive for that project!

Once the drop happened, I decided to wait at least 3 weeks before trying any fixes… in this case, a rollback could happen (unfortunately, this has not happened lol!).

While I was waiting… I started to analyze a few projects and started to take notes of what had changed in the SERP:

So my first thought was to start building branded and naked links, however, before starting to take this theory into action, I wanted to make some more tests.

Since only my EMD’s sites were affected, I’ve thought that could be related to an over-optimization of my content so I did a few small changes and noticed big improvements right away!

I’ve taken my homepage (since its an EMD affiliate site, the homepage is the big money maker) and made some changes like:

I’ve made the change on 26 May 2020 and submitted a new recrawl in Google Console. 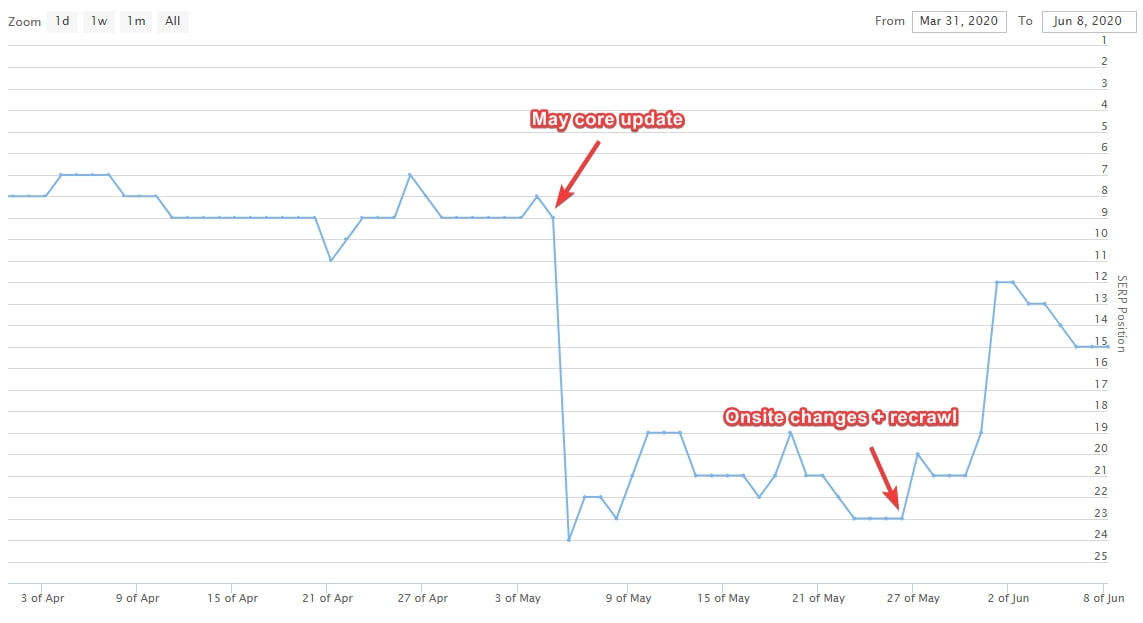 Good news… Google seems to react really positively to my recent onsite changes! I’m far from having recovery fully but it’s in the right direction! Now that I know that Onsite SEO is a big part of that algorithm update… I know at least that I will not waste my time updating all my content.

So now that I know 2 things from this core update:

This week I’ve scheduled 15 new links with natural anchors like (visit emd.com for more guides, check out emd.com for additional info on X, etc…) that will be dripped in the next 30 days.

In addition, I will edit the title, h1 & h2s of all my articles to make them more natural. I don’t plan to make changes to the content itself because it’s already optimized with Surfer and well balanced IMHO, I think the biggest impact for onsite ranking factors are Title, Headings, and the Slug so I will really focus on that for now.

Okay, 1 month has passed now… I did many onsite improvements to my site… I’ve built a ton of great links in the past 30 days and the site didn’t recover yet.

The onsite changes have helped me to recover a lot of keywords but from page 4 to page 2… FAR from being satisfying.

I have no doubt now that this May Core Update plays a big role with the backlinks profile.

I’ve passed 6 hours today to make a big detox audit on my site and know what… I’ve added over 1000 new domains to my disavow file!

To achieve this, I have combined GSC Data with SEMrush and Ahrefs (Live + Historical), to finally create a massive list of toxic links, a total of 1235 domains! 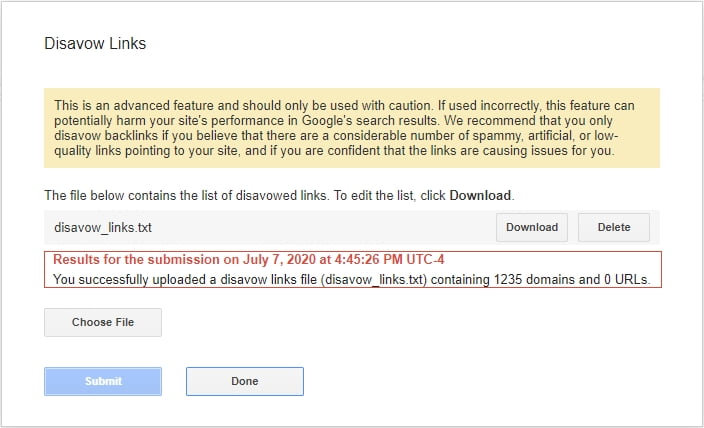 In 48 hours, I will submit them to an indexer and wait another month. I am really confident that I should see big improvements in the coming weeks…

Yes, finally some good news… But still far from being satisfying since I’m far from having recovered my earnings yet… However, it's a great start!

Also, I didn’t do anything in July excepted submitting the backlinks for disavowing as I wanted to “isolate” the case study and limit the other factors to make this case study inaccurate.

My thoughts are that since May 2020, Google has changed the way it manages the “spammy backlinks” and they don’t ignore them anymore, or at least, not like it was before. This disavow submission was containing a lot of spammy backlinks that I never care to disavow/block.. but I believe now that everyone should add to their monthly tasks, a detox review of all their sites since they can definitely hurt!

Like BJ and TVC, I stopped updating my case studies because of the lack of time. However, I really wanted to update this one because it's misleading!

Disavowing haven't worked! Yes, I have seen an uptrend a few weeks after the disavow but it was a pure google dance... it didn't last 48 hours and my ranking has moved back to what it was before the disavow.

I wanted to update this post because I don't want you to believe that disavowing is a magic pill... It's not! I've cleaned 4 sites total this year using Rick Lomas service and none saw a major change. It didn't hurt, but it didn't help.

I would not recommend doing a backlinks cleanup EXCEPTED if you've received a manual penalty.

I think the May core update, including December, both were focused a lot on authority.

Before May, I was ranked #1 for my main keyword for almost 1 year... Then May happened and big authority sites took all the SERP. When I  do mention authority sites, I refer to really big ones, like

I've tried everything to recover. Unfortunately, nothing has worked (At least to recover my 1st spot).

YES, I moved back to top5... But I still have those 4 big boys above me but whatever I do, they stay the kings. So if you think that building backlinks is still "secondary", then think again.

Authority is king, and will always be.